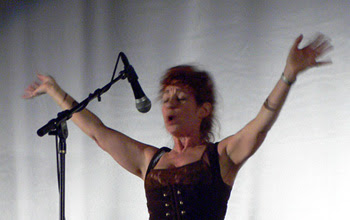 "DISBAND consisted of women artists, none of whom knew how to play any instruments so we used Kentucky Fried Chicken buckets, hammer, radio, flag, bedsheet, party hats, flour and fake braids to perform songs like "Every Day Same Old Way," "Sad," and "Iran-y." DISBAND included Daile Kaplan, Barbara Kruger, and April Gornik in the early days. Later, Martha Wilson, Donna Henes, Diane Torr and Ingrid Sischy were joined by Ilona Granet. Then Diane dropped out when we were in Italy, and we disbanded in 1982."
-- Franklin Furnace 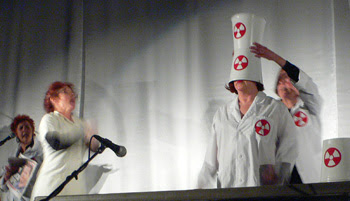 I was sitting in the audience with artists Carolee Schneemann, Julie Harrison, and photographer Terry Slotkin, realizing how fortunate I was to be among interesting, brilliant, courageous, and beautiful women!

WACK! ART AND THE FEMINIST REVOLUTION - at P.S. 1 MOMA