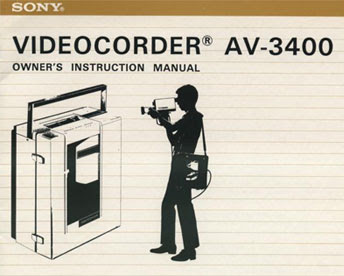 After seeing DISBAND perform, I was drawn into looking through some of my video tapes from the '70s. While at Washington University my friend Danny Dries bought one of the earliest portable video recorders, the SONY 3400, I was crazy to have one too. At that same time the magazine Radical Software showed up in my life:

I finally found a way to buy a SONY 3400 in the summer of 1972 (it cost as much as my car!). Video tapes from then were reel-to-reel 1/2 inch, and when I tried to play them back in the '90s they just sat on the machine and squeaked! Nothing would play! But in about 2001 I read it was possible to "bake" old SONY tapes in the oven, driving out the water that was causing the problem, and they would play. So I cranked up my oven, and managed to re-record many of my old tapes.

My old 1/2 video now is jumpy, and has scan lines (it looks like an iMovie effect) but they do play, and I just put the first one on my web site as a flash movie.

They really are historical documents (in the words of Galaxy Quest). In 1972 having a personal video recorder was like having the first Brownie camera!